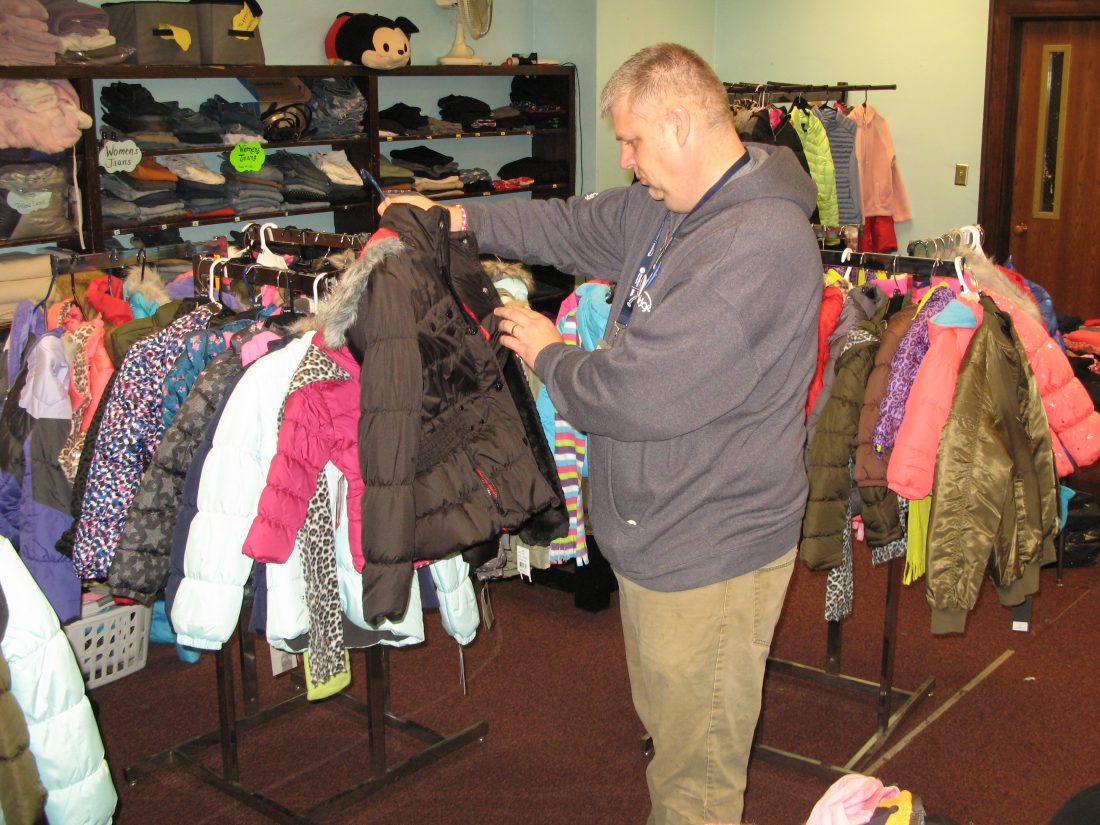 Warren Scott
CLOTHES AVAILABLE — David Holden of the AmeriCorps Life Bridge program surveys the assortment of clothing found in the clothes closet at the Bruin Bridge Center, Brooke County Schools’ alternative learning center. Located in the former Wellsburg Middle School, the school has acquired coats, hats and other clothing for all ages and is inviting residents in need to stop by between 11:30 a.m. and 1 p.m. Thursday and Friday.

WELLSBURG — Maintaining a clothes closet is one of many ways students at the Bruin Bridge Center, Brooke County Schools’ alternative learning center, have been learning life skills.

And it has accumulated a large assortment of coats, hats, shirts, pants and other clothing for all ages so the school is inviting anyone in need to stop by for some between 11:30 a.m. and 1 p.m. Thursday and Friday.

Visitors should press the intercom button at the front of the building, which is the former Wellsburg Middle School, and a staff member will let them in.

Michael Lewis, the school’s administrator, said students there have been learning to do the laundry using a washer and dryer there under the direction of staff member Rebecca Kaniecki.

It’s one of many life skills being taught to the students, who also have been learning about preparing healthy meals from David Holden, a member of the AmeriCorps Life Bridge program.

Holden has been sharing skills he learned while earning a culinary arts degree from West Virginia Northern Community College and helping them to earn food handler’s cards through the Brooke County Health Department and complete the online ServSafe food safety program aimed at future restaurant and other food service managers.

Holden said some are working in the kitchens operated by the food service businesses at Bethany College and West Liberty University through a partnership with those schools.

He said the arrangement has resulted in a donation of dinnerware from Bethany, and he’s in talks with the schools about receiving other kitchen equipment.

Holden noted many restaurants are seeking workers at this time, adding, “Whatever they do in the future, it gives them something to fall back on.”

He said learning to adapt to various workplaces will help them in whatever career they pursue.

“We have an exciting work program, and this is falling into that,” said Lewis.

He said with the help of Youth Services System of Wheeling, students from the school also have secured jobs cleaning at Brooke County Schools’ bus garage and working at local stores.

He added some have spent part of their school days in career technical programs at Brooke High School and gone on to graduate.

It’s something the teens might not have envisioned when they were referred to the center, which was established years ago to serve students who, for various reasons, didn’t function well in a traditional classroom.

“It’s been called the place for bad kids. But we have very few discipline problems,” said Lewis.

He said difficult home lives is a common factor.

Noting Holden also speaks to the students about the dangers of opioid addiction, Lewis said, “Unfortunately, some of our students already know much about it. Some have lost parents to it.”

Holden said some of the students help their grandparents or single parents to care for younger siblings, so when he teaches them to prepare nutritious meals, it may benefit an entire household.

Lewis said about 70 students in grades 5-12 attend the school in person while more than 100 receive virtual instruction.

Regarding the latter, he said some prefer working from home and some do it while working in full-time jobs.

Holden said he believes the students benefit from the one-to-one instruction available at the school.

Lewis said he and his staff make it clear they care about the students and attempt to help them even after they have completed school.

As an example, Holden cited a student interested in attending a Pittsburgh technical school receiving guidance from one of two counselors from C.H.A.N.G.E. Inc. who keep regular hours at the school.

Lewis said each student has an individual learning program that incorporates their own personal goals.

He said the school has received support from many directions, including Brooke County Superintendent Jeff Crook and Deputy Superintendent Corey Murphy; and various community programs and groups.

Among them is the Wellsburg Lions Club, which donated many coats to the clothes closet; and the Community of Christ Church in Follansbee, which has regularly supplied food for students to take home.

Lewis said, “One of the wonderful things about this community is I’ve never been told no. If I say, it’s for the kids, they say, ‘I’m in.’”

(Scott can be contacted at wscott@heraldstaronline.com.)