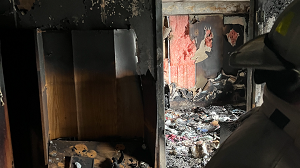 Photo from GoFundMe page on behalf of an injured fire victim >>

Sunrise was still three hours away on Saturday, Jan. 22, when a fire was reported in a third-floor unit of the seven-story Chestnut Manor, an apartment building for the elderly and disabled in Arlington.

At 4:09 a.m., the slumber of the residents of the 100-unit complex was disrupted by blaring internal building fire alarms. Alarms also rang in the three Arlington fire stations waking the on-site firefighters.

YourArlington listened to four audio files on Broadcastify, a source of live and archived public safety radio transmissions. The recordings capture the initial alarm at 4:09 a.m. until breakdown of the scene around 6 a.m.

This tick-tock narrative takes the reader into the scene in real time as events unfolded that morning.

EDITOR’S NOTE: Gaps between time frames means no audio was heard on the recordings although communication may have been taking place on the ground. Also, there is significant distortion on the audio because of fire alarms chirping or blaring, fire sirens and poor transmission. These sections are marked “inaudible.” The transcript was edited for context and clarity, but not content.

Dispatch – “Arlington Fire units responding to 54 Medford St. Be advised that the resident (according to property records, this is Margaret Sheehan, vice president of the Chestnut Manor tenants’’ association) of apartment 305 is reported to be unable to evacuate the apartment. She is standing on a porch outside her apartment but on the third floor.”

Command 2 – “Direct anybody down to the front door.”

Firefighters – “Command 2, we’re in.” (May indicate that firefighters are inside Apt. 305.)

Command 2 – “Command 2 to Engine 2. Come to the front of the building. I’m on the opposite side behind the Keefe Funeral Home.”

Command 2 – “I have a working fire at this time. Go ahead [Dispatch] and backfill the remaining stations with out-of-town companies.” (Mutual aid request from surrounding fire houses to cover fire houses in Arlington.)

Command 2 – “Command 2 to Dispatch. Go ahead and contact the MBTA. I want to bring a bus here for the residents so that they have something to go into for warming.”

Firefighters – “Command 2. I need a high-rise pack up here.”

Command 2 – “Engine 2 is en route. Apartment 305 with a high-rise pack.” (A high-rise pack is a bundle of hoses that can be deployed in different locations.)

Command 2 – “You can come into the manor itself. Meet me behind the Keefe Funeral Home. I’m on the front side of that building with visibility to the fire.”

Command 2 – “Heavy fire. I can see heavy fire from the Delta side (right side of the building). Command 2 to Engine 3.”

Command 2 – “I need you to get to this side of the building with your pump. I need a hose line back here.”

Engine 1 – “We hooked up to the standpipe, yet?” (A standpipe is a water main that runs up through the building.)

Engine 3 – “Engine 3 to Command 2. Do you want us on the Medford St. side with our pump and grab a hydrant? Or just on Chestnut?”

Command 2 – “On the Medford side. You’re on the same side as the church and the school.”

Command 2 – “Engine 3. I need a ladder as well to come in here. Come down to the intersection.”

Engine 3 – “Engine 3 portable to Engine 3 backstop. When you’re ready let us know and we’ll charge that up.”

Command 2 – “Somerville. Stage where you are right now. I’m gonna need you guys to help bring in that line.”

Engine 1 – “Command 2, have them drive (inaudible) to the parking lot. They can probably get me a line that way.”

Engine 3 Portable – “3 Backup, can you charge that line?”

Engine 1 – “Delta side of the building.”

Dispatch – “Command 2, we’re getting reports of patients [residents] up on the 7th floor. Several in wheelchairs. They may need assistance getting out of the building.”

Cambridge – “Cambridge Engine 4 calling Command. You got any orders for us?”

Command 2 – “I’m gonna need you to report to my Charlie Delta (back right) corner, and enter the building and start evacuating the second and fourth floors.”

Command – “Medford Engine 2, bring your engine into Chestnut Manor to the Charlie Delta side. You’ll be closest to the cemetery.” (News photos show that engine parked on Brook Ave. off Medford Street in the cemetery.)

Engine 3 Portable – “Engine 3 Pump, you can charge that two-and-a-half.”

Command – “Dispatch. Fire’s being knocked down. Making progress.” (Means big flames are extinguished, although there may still be a smoldering fire.)

Dispatch – “Fire being knocked down, making progress. 4:40. Would you like the electric, gas (inaudible).”

Command – “Yeah, that’s affirmative. Go ahead and bring the utilities in.”

Firefighters – “Residents are saying that people are stuck on the third floor, looking out their windows (inaudible).”

Command 1 – “Fire knocked down.” (Command 1 is inside the building.)

Ladder 1 Portable – “Command 2. Are they still in the hallway with the high-rise pack?”

Winchester Fire – “Arlington, Winchester is covering at your Highland Station.”

Somerville 3 – “Command. We’re going to accompany the truck company (inaudible) – we’ve got a lot of locked units up here that need to be searched.”

Somerville 3 – “We got a code coming down the stairs. We’re gonna need an ALS [Advanced Life Services] in the lobby.” (Reporter believes this is 88-year-old Bridget Doyle in #307, next door to fire in #305.)

Dispatch – “There is an ALS truck on scene. Armstrong standing by.”

Command – “Dispatcher, there are no ambulances here.”

Command – “Ladder 1. Keep me updated inside the unit.”

Ladder 1 – “Patient being brought out the rear of the building. You’re gonna need immediate ALS back there.”

Somerville 3 – “The primary of the fire floor [floor 3] has been completed. (Primary search means initial sweep of units for people.)

Command 2 – “Area’s cleared by Somerville. Go ahead and check the 4th floor. At this point, we’re going to start directing any residents to shelter in the inside of the building, at the Alpha/Bravo [front, left] corner of the Community Room on floor one.”

Command 1 – “Dispatch. Be advised any responding, additional ambulances to stage at the Arlington Catholic parking lot.”

Dispatch – “Dispatch to Command 2. I have a distress signal from a radio number D141.”

Command 2– “Command 2 to Arlington units on the fire. I need accountability of all your personnel. We have a beacon sounding.”

Command 1 – “Dispatch, can you call the Red Cross and ask them to respond, please?”

Engine 3 – “Dispatch, do you know if the ambulance transported from 54 Medford St.?”

Dispatch – “I have not been informed of any ambulance transport, yet.”

Command 1 – “Five minutes ago, the ambulance was still on scene working the patient.”

Command 1 – “Command 1 to Engine 1 portable. Do you have your people?” (Turns out to be false mayday.)

Ladder 1 – “Command 2, we have to refuel our air (inaudible). Can we shut these alarms down?”

Command 2– “Standby. I’ll go into the building and get to the alarm panel.”

Somerville 3 – “Secondary on the fire floor has been completed.” (Refers to a second sweep of units for people.)

Firefighters – “Knocked down visual fire in the (largely inaudible).

Command 1 – “Dispatch, see if you can get a contact for a building maintenance guy or something for the building, and have them respond.” (Refers to contacting the staff of the Arlington Housing Authority that owns and manages the building.)

Command 1 – “The 4th floor is entirely clear and evacuated. I’m in the apartment above the fire – 405 (inaudible)”

Command 2 – “Smoke condition is cleared on the 4th floor. 3rd floor and 4th floor have been completely evacuated and confirmed.”

Command 2 – “Command 2 to interior command. Make your way to units above in this wing on floors 4, 5 and 6. Advise residents that they can shelter in place for the time being. Arlington companies are making their way up to assist with notification [to residents] to remain in place.”

Dispatch – “Dispatch to Command 2. Utilities have been notified. The Red Cross has been notified. Do you need an off-duty FIU [Fire Investigation Unit] officer?”

Dispatch – “Also, that party (Bridget Doyle) was transported to the Mt. Auburn hospital.

Interior Command – “Interior Command to Command 2. Everybody on 4 and 5 notified. Situation is stable. Arlington companies are working on the floors above it at this time.”

Command 2 to Interior Command – “Come down to the lobby on the 1st floor. We’ll go through the next stages of what we’re going to do to progress through this incident.”

Command 2 – “Command 2 to Arlington companies. We’ve completed overhaul and we’re making up. Start breakdown of the scene at this time. Leave the line that’s in the standpipe in place. All other lines to be broken down. I’ve released Engine Company 2 from Medford.”

Interior Command – “Command 2, can you silence the alarms?’