“I don’t think she realized she was actually painting herself,” said Suazo’s father, Taos Pueblo artist David Gary Suazo. “I called DeAnna and her art the bubble of joy. She made people happy.”

Tragically, Suazo’s parade of fabulous girls and her brilliant life and career reached a premature finale. Last November, the 29-year-old artist was killed on Taos Pueblo by the violently possessive boyfriend she was planning on breaking up with.

She had been pursuing a master’s degree at the Institute of American Indian Arts in Santa Fe, New Mexico, and juggling her usual multiple projects.

A vibrant and illuminating look at her life’s work can be seen at the Indian Pueblo Cultural Center in Albuquerque through February 18, 2023.

The exhibit, perfectly named “Traditional Girl With a Contemporary Pop,” contains 23 of her pieces, selected by her parents. They range from small drawings on ledger paper to seven-foot-high acrylic paintings.

Never miss Indian Country’s biggest stories and breaking news. Sign up to get our reporting sent straight to your inbox every weekday morning.

Suazo’s death is another heartbreaking instance of even the most confident and successful of women becoming embroiled in toxic relationships and falling victim to domestic violence.

“It’s like a virus,” said Paula Mirabal, Suazo’s aunt and head curator for the Indian Pueblo Cultural Center. “She was an empowering woman. She was so funny. She was always laughing. She had a cute little voice. She was fantastic. Her brain was constantly going.”

At the exhibit’s emotional opening in April, more than 400 artists and community members came out to celebrate Suazo’s life and work, and listen to presentations about domestic-violence issues and prevention.

Mirabal worked closely with representatives from the Coalition to Stop Violence Against Native Women in producing the exhibit.

“I hope that when people come to see DeAnna’s art, they start having conversations around safety and accountability in tribal communities,” said Tiffany Jiron, the coalition’s advocate coordinator.  “Sadly, it’s our own men, from our tribal communities, causing this harm.”

Mirabal said the coalition was a priceless asset in mounting a Suazo exhibit with the required sensitivity, resources, and sense of responsibility.

“I reached out to the coalition because they were able to help me talk to DeAnna’s parents about healing from this trauma and methods on how to work through it. I’m able to use this as a platform to have those kinds of discussions,” she said. It’s  a good thing that we have all of the coalition’s amazing information to draw from to help people. I set up a pedestal at the exhibit with flyers and information about domestic violence, emergency numbers…. Whatever help they need is there.”

At the opening, Geraldine Tso delivered a short talk about the importance of identifying and tackling issues for both would-be perpetrators and victims, before they erupt into tragedy.

“One of the points that I made is that if you do have a mental problem, to go get yourself some help, or if you’re stressed out with your partner, go seek help,” she said.

By the time she passed, anyone acquainted with the Indigenous art scene could instantly recognize a Suazo girl when one popped up on posters or social media.

“She didn’t know it, but she was already famous,” David Gary Suazo said. “Me and her mom would always wonder how far she would have gone and what else she would have created. She was getting famous so fast. She was like a shooting star.”

Suazo’s art was all over the place because she was always using her talent to bring positivity and power to the Native community.

As she worked on pieces for schools, markets, and exhibits all over the country, from the Heard Museum Guild Indian Fair and Market in Phoenix to the Smithsonian’s National Museum of the American Indian in New York, she also created imagery for major Indian Country organizations and events advancing culture, art, and  education.

She illustrated the posters and promotional materials for the LA Skins Fest Native American film festival, and her work adorned the artist badges at last year’s Santa Fe Indian Market.

She had just completed illustrations for a forthcoming storybook about Pueblo life for Taos Pueblo’s Tiwa Language Program.

“I can’t wait for this book to come out. When I saw it, I just broke down crying. I told David, this is one of her best works,” Tso said. “It’s not of the girl that she always portrays in her drawings holding a snow cone, or an ice-cream cone or a lollipop, or glasses. It’s actually a whole family. They’re fishing, they’re cooking…. It’s all about Pueblo life. She put her life in that book.”

The chapters of Suazo’s own short, bright life also percolated with culture and close family. She took to making art organically in the environment of creativity, support, and generosity her parents cultivated.

As early as age 2½, she started drawing animals and Pueblo scenes on any paper she could find, from ads to pages ripped from the local phonebook.  Eventually, her parents started supplying her with vintage ledger paper and music sheets.

She also grew up on the Native art market circuit, where she and her older siblings Shundine and Dexter were known to commandeer the booths of absent artists and create and sell their own art on the spot.

A few years into her practice, Suazo started experimenting with drawing the stylish Native and Japanese cartoon-influenced girls that eventually became her calling card. The idea had been passed down from her mother and her older sister.

“Before Christmas, I would paint these little girls on felt and cut them out for Christmas ornaments,” Tso said. “DeAnna’s sister Shundine caught on to it, and she started drawing little girls. She pursued it to a certain point and then she got into other interests, and DeAnna picked up on it. She made her twists and turns around these little girls, finding a way where she was very comfortable with it.”

For Suazo’s parents, it was fascinating to see her growing maturity as an artist reflected in her girls.

“She went from watercolor to acrylic, to illustration pens and India ink, and she mixed them all together,” her father said. “As she started to progress, her girls became very detailed; she started to use movement, the faces started to have expressions.”

Tso was awed by how her daughter packed so many references into her pieces.

“She was very much into her culture. She said she wasn’t trying to do ledger art like the Plains Indians. She wanted her own Native Southwest style. And then she put a little bit of Sailor Moon in. And then she also put in these little geometric shapes ” Tso said. “She was putting everything that she could think of into these drawings. Like the girls will be carrying snow cones, ice cream, lollipops, and those were her favorites as well. And she was designing the  jewelry in her drawings based on the style of her grandfather, who was a silversmith. She was putting everything that she knew of into these drawings.”

In the aftermath of DeAnna’s death, the Suazos have been flooded with requests to buy her work.

“I get asked almost every day if we have work for sale, and I have to say no. I put a cap on all her work where it’s not for sale,” he said.”But the family all agreed that in October, for her birthday, we want to do a limited edition of lithographs on paper so people can purchase those.”

Although it will be a while until collectors can buy her art again, Suazo fans can surround themselves in her whimsical world by attending her exhibit and/or checking into room 407 at the Nativo Lodge in Albuquerque, which is sort of a symbolic second home for the Suazo family.

Each of the hotel’s rooms are painted by Native artists. Suazo and her parents all painted rooms there.

DeAnna’s room flows with mountains and flowers, and features a sassy girl in sunglasses that makes her father strongly feel her aura.

“Her room is very powerful. It’s like she’s there,” he said. “ The way the girl with the sunglasses is looking at you says “this is my room.” 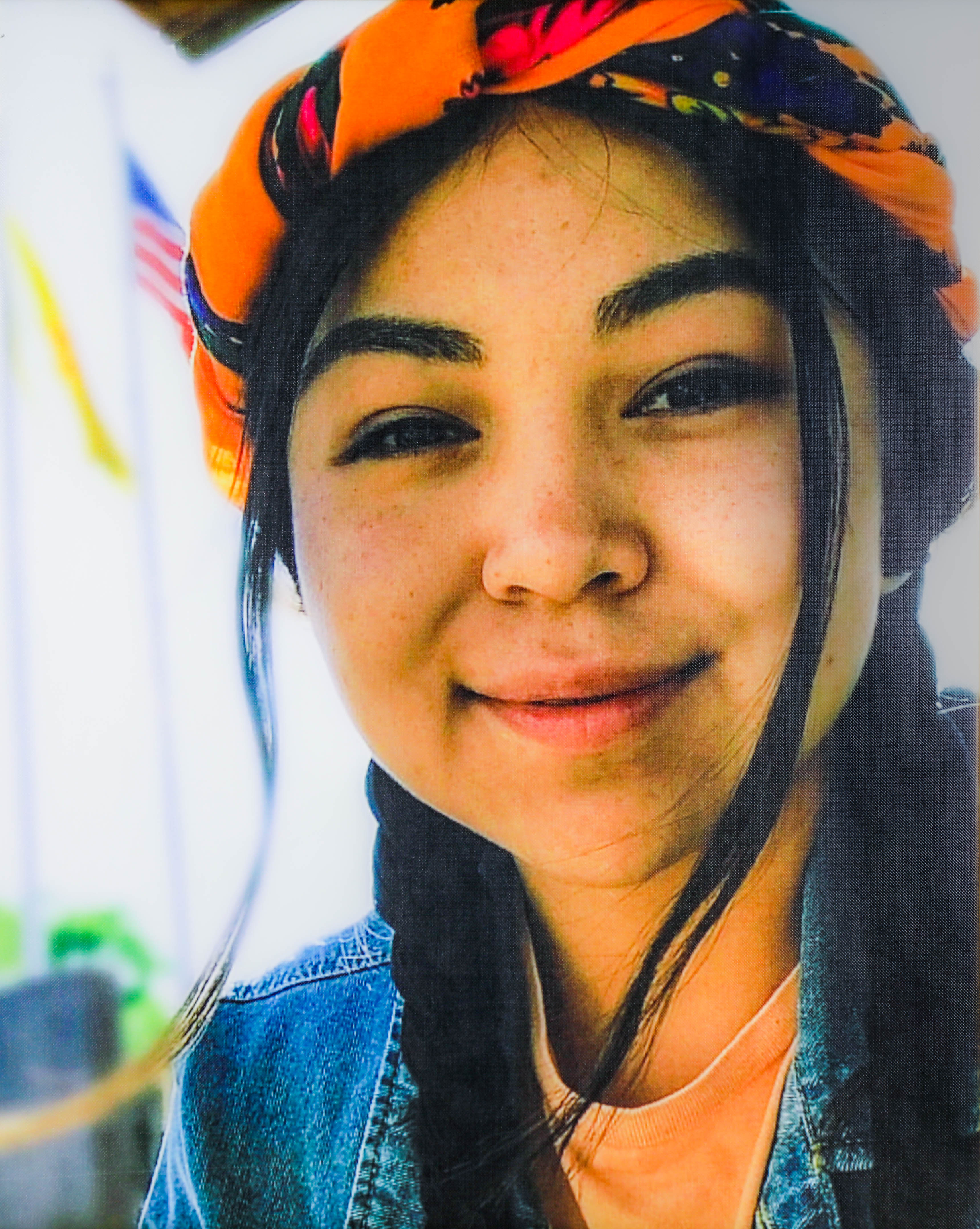 One Down, 500 to go: Native Nations Contextualize their Own Artifacts at New York Museum
Beyond Bourbon and Hats: The Kentucky Derby and Indian Country
Roger Goodell Wears Medallion Gifted by 7G Foundation at the 2022 NFL Draft
What’s Going on in Indian Country: April 28-May 5

Do you appreciate a Native perspective on the news?

For the past decade-plus, we’ve covered the important Indigenous stories that are often overlooked by other media. From the protests at Standing Rock and the toppling of colonizer statues during the racial equity protests, to the ongoing epidemic of Murdered and Missing Indigenous Women (MMIW) and the past-due reckoning related to assimilation, cultural genocide and Indian Boarding Schools, we have been there to provide a Native perspective and elevate Native voices.

Our news is free for everyone to read, but it is not free to produce. That’s why we’re asking you to make a donation this month to help support our efforts. Any contribution — big or small — helps us remain a force for change in Indian Country and continue telling the stories that are so often ignored, erased or overlooked.

Author: Tamara IkenbergEmail: This email address is being protected from spambots. You need JavaScript enabled to view it.
Tamara Ikenberg is a contributing writer to Native News Online. She covers tribes throughout the southwest as well as Native arts, culture and entertainment. She can be reached at [email protected]

The importance of improving online communication at work

Leave The Video Transcription To VidTags