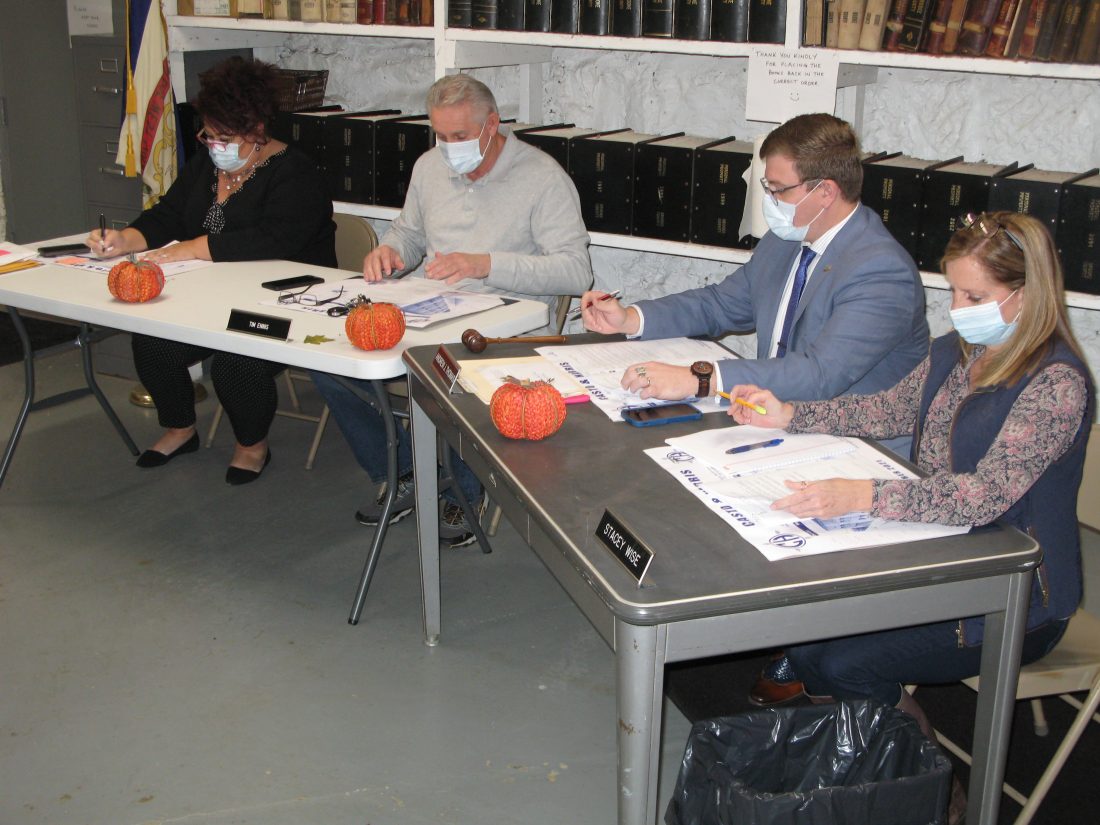 Warren Scott
TEMPORARY DIGS — The Brooke County Commission, on Tuesday, met in a records storage room of the county courthouse. While crews are working to replace the building’s elevator, the commissioners have given up their meeting room so it may be used by staff assisting visitors unable to ascend the stairs.

WELLSBURG — While crews were working to replace the elevator of the county courthouse, the Brooke County Commission met Tuesday in a records storage room in the building’s basement.

The commissioners made the move to make their own meeting room on the first floor available for staff assisting visitors who aren’t able to take the stairs to the second or third floors.

Their meeting room also is being used to store some of the parts and equipment needed for a new elevator from the Schindler Elevator Corp.

The $113,500 project is being funded through a $100,000 grant from the state Courthouse Facilities Improvement Council and a 20 percent match provided by the county.

The work is expected to be done over several weeks. During that time, the commissioners are encouraging those with mobility issues to call the appropriate department first to determine if their business can be done by phone, mail or the Internet or to set up a time to meet with staff.

The courthouse will be closed on Thursday and Friday for the Thanksgiving weekend.

Also on Tuesday, the commission accepted the resignation of Wayne Mielke as the county’s fiduciary commissioner, a role that involves overseeing the probate process for a deceased resident’s estate.

The commission has appointed attorney Aaron Caviani to fill that role and attorney Marc Chernenko to serve as special fiduciary commissioner when there is a conflict prohibiting Caviani from doing so.

Thomas, an attorney himself, has abstained from voting on fiduciary matters that come before the commission because he and the law office where he is employed have handled many estate cases.

In other business, the commission:

– Tabled for further review a lone bid of $30,678 submitted by Stephens Auto for a 2021 Ford F150 truck for the county’s animal shelter

– Thomas reflected on the recent death of Mike Wehr, who was president of Starvaggi Industries in Weirton. He noted Wehr served on boards for several organizations, including the Business Development Corp. of the Northern Panhandle Corp., Weirton General Hospital and Weirton Salvation Army; and supported a number of charities in various ways.

“He was always happy to help. We are going to miss his generosity in this area,” said Thomas.

– County Commissioner Tim Ennis said, on a trivial note, he and County Assessor Tom Oughton have learned the county’s geographic center is at the Grimes Golden Roadside Park along state Route 27.

Ennis noted the park is said to have been where the first Grimes Golden variety of apple was discovered.

The fruit is said to have been planted with seeds provided by Johnny “Appleseed” Chapman and was the inspiration for the Wellsburg Applefest.

(Scott can be contacted at wscott@heraldstaronline.com.)

How to optimize your podcast for SEO