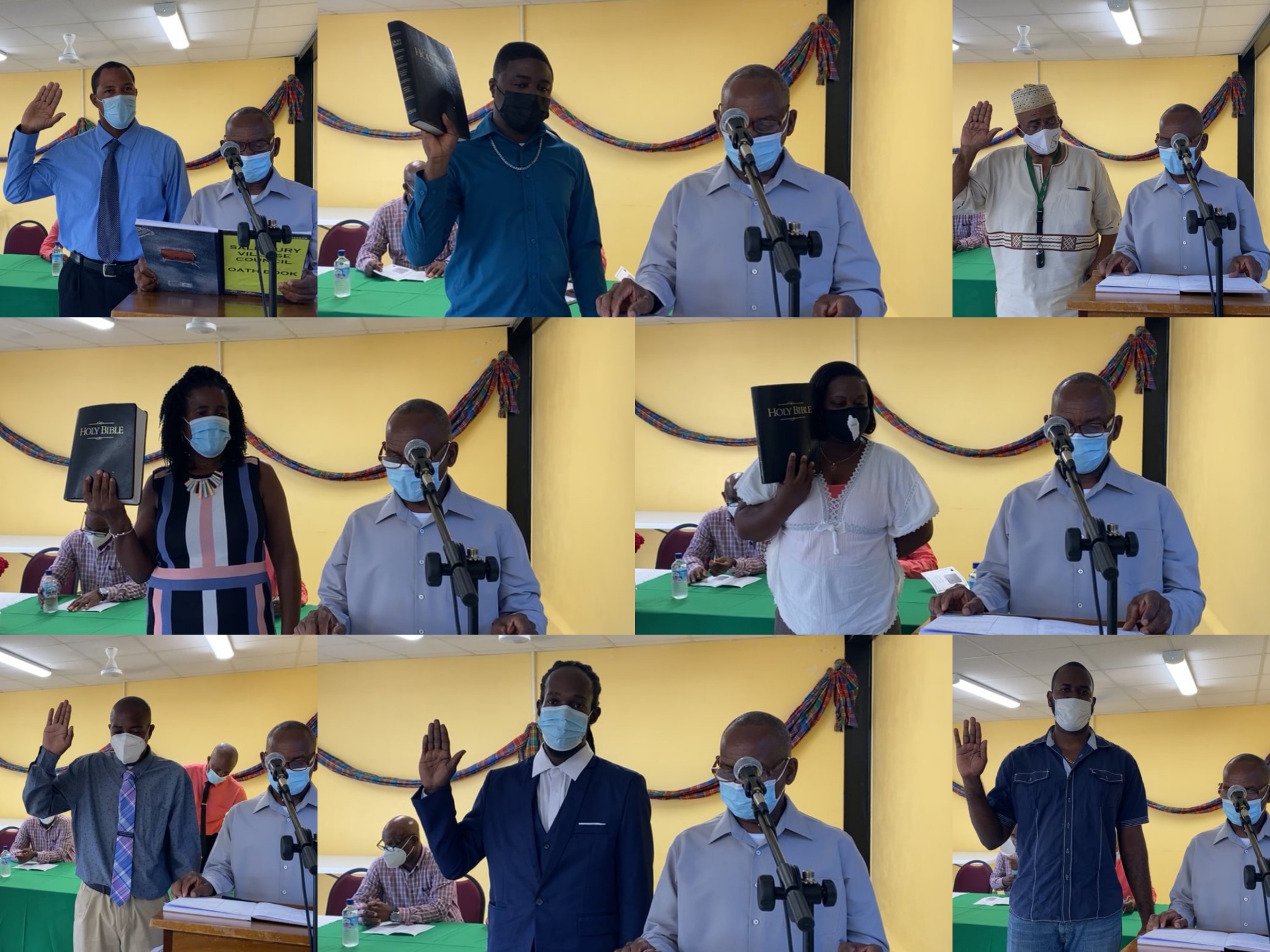 Residents of the western village of Salisbury are being urged to join hands with the newly inducted village councilors for the advancement of their community.

This call was made by several officials who addressed the first swearing-in ceremony of the reestablished Salisbury village council earlier this week.

Electrician Russel Felix who found favour with the electorate on March 9th 2022, has been elected to serve as the chairman while Selma Louis, Ned Toussaint, Sylvia Vidal and Vincent Langlais- the five selected members- as well as Dirk Frederick, Ridge Vidal and Franklyn Georges- the three nominated members by the government- will make up the composition of the eight members on the village council.

Expressing his gratitude to the villagers for the large turnout during the elections, Felix pointed out that the road ahead will not be easy, therefore he implored the people of Salisbury to provide their full support to him and his team as they gather finances to commence several community projects.

“This is not a one-man show, nor is our development solely dependent on just eight members of the council. The only way we can move forward is through a collaborative effort from both the people of the community and the members of the Village Council. With that said, we anticipate your full support and cooperation to help move our community to the heights that we know we are capable of attaining,” he said.

According to Felix, some of his plans include a cleanup and beautification campaign, enhancement of the village’s agricultural and fishing sector, empowerment of our youth, maintenance of the village roads and infrastructure, development of the sporting activities, improvement to the lighting of the village as well as proper care for the elderly.

“Having said all this, I believe that we are all ready to take charge of our development, growth and advancement and ensure that we live in a healthy environment” the chairman stated.

Echoing similar remarks, local government commissioner Glenroy Toussaint noted that the success of the council is heavily dependent on the support it receives from the villagers of Salisbury.

According to Toussaint, “if the council fails, you’ve failed in your responsibilities as residents to provide the support to the council in whatever way shape or form. Yes, it’s obvious, that you can criticize, but when you do so do it in a constructive manner to build the council. Provide suggestions that will seek to enhance the ability and capability of the members of the council to address felt needs in the community.”

He also pressed on the councilors the importance of community involvement in all their decision making.

“We have to ensure at all times our people are involved in the process,” he said.

Another one of his recommendations is for the development of a community strategic plan for the short, medium and long term.

Parliamentary Representative for the Salisbury Constituency Hector John, who played a pivotal role in the re-establishment of the village council, stressed to the new councilors that their task of building community togetherness begins immediately.

He encouraged the newly inducted members to use this opportunity to work with other groups and individuals in the community to build capacity and forge new linkages with local, regional and international organizations toward the development of the farming community.

“Our number one goal must remain the advancement of Salisbury,” John stated. “

I call on every counsellor to give back selflessly, genuinely and positively to the advancement of our community because the people of Salisbury will be expecting nothing less. As the member of parliament for Salisbury, I pledge my full support to the Salisbury village council.”

The senior member of parliament urged his constituents not to dwell on what has happened in the past but instead to focus their attention “on what we are going to do to make the best happen in the future.”

Dr Adis King, who represented the Minister of Sports, Culture and Community Development, made known that the Salisbury village council can send a strong message to the rest of Dominica, that it is a body that upholds and respect the laws and regulation, is transparent and accountable, and provide that medium for the active participation of the residents as well as a strong partnership between central government, the private sector, and other interest groups within and outside of the community.

According to Dr King, in light of the critical role which the councils of Dominica play, she believes the Salisbury village council should be the driving force towards the establishment of an active disaster management plan.

“The plan should not only prepare your response capacity to storms and hurricanes, but also to other events such as droughts, earthquakes and heavy rainfall, which can occur outside the hurricane season. It is imperative that the council lead the way to ensure that there is a cadre of trained personnel at the community level who can support the official first responders to conduct search and rescue, clearing of roads, assessments and to coordinate early stages of relief distribution after an event,” the minister stated.

Reiterating the call made for the villages to join hands with the newly inducted body, he emphasized that the eight councilors cannot do it alone hence they require the active participation of the residents of the community to achieve their desired goals.

“The council is expected to lead and correspondingly the villagers are expected to follow. The councilors have made a commitment and sacrifice to lead the community. So it is only fair that you as villagers provide them with the requisite support,” she encouraged.

She issued an appeal to members to commit themselves to the task ahead,  work in tandem with one another for the best interest of the community and most importantly remain true to the oath that they have taken.