FAYETTEVILLE — One of the more popular stretches of the Razorback Greenway running through the city will be closed for about six weeks as crews wrap up a portion of the arts corridor project downtown.

Users won’t have access to the portion of the greenway, which doubles as Frisco Trail, stretching from Center Street south to Prairie Street, until May 6, according to a news release from the city. The more than 1,700-foot-long path runs through the middle of the Fay Jones woods in between Gregg Avenue to the west and the Fayetteville Public Library to the east.

Crews will replace the asphalt on the 12-foot-wide trail with concrete, said Matt Mihalevich, the city’s trails coordinator. The asphalt is about 20 years old and has several cracks filled with tar, especially toward the southern end. The concrete should have about triple the lifetime of the asphalt, he said.

It’s important for users to avoid that section of trail because it will become unsafe for pedestrians and wet cement will need to dry, Mihalevich said. Work on the trail will be done in time for the Square to Square bike ride between Fayetteville and Bentonville on May 7, he said.

“Hopefully, people will be patient, and we’ll get it replaced and it’ll be better than ever,” he said.

The width of the trail will stay the same. The trail also will get new lights. Flashing pedestrian crossing lights at Center and Prairie streets will activate with motion sensors, rather than requiring users to hit a button.

Signs will direct users to Gregg Avenue to the west. The street is closed to cars moving through because of restoration work being done on the creek, named Tanglewood Branch, as part of the arts corridor project. Cars belonging to residents along the street, bicycles and pedestrians will be allowed to move through.

“We feel like it’s the safest alternative,” Mihalevich said.

That part of the Razorback Greenway is one of the busiest sections of trail in the city, said Dane Eifling, the city’s mobility coordinator. About 800 daily users frequent the area over the course of a year, and in times of good weather with students in town, more than 1,000 people and dogs can hit the trail in a day, he said.

Voters approved a $31.6 million bond issue in 2019 to create an arts corridor downtown, roughly covering West Avenue from Dickson to Prairie streets. Money for the project also is coming from separate 2019 bond issues for trails, streets and drainage.

The entire corridor will be named the Ramble, a reference to the late Arkansas musician and former Springdale resident Levon Helm. An area from Dickson to Center streets will be known as the Upper Ramble, and Center to Prairie streets, including the woods, will be known as the Lower Ramble.

Construction at the Lower Ramble started last year. Other aspects include work on West Avenue, installing boardwalks at the Fay Jones woods and restoring Tanglewood Branch.

City officials hope to unveil a completed Lower Ramble with a ceremony in May, Public Works Director Chris Brown said.

The city broke ground on the deck in January. Construction is expected to take about a year.

Once the deck is finished, work will begin on the gathering space. The entire arts corridor project should finish in 2024. 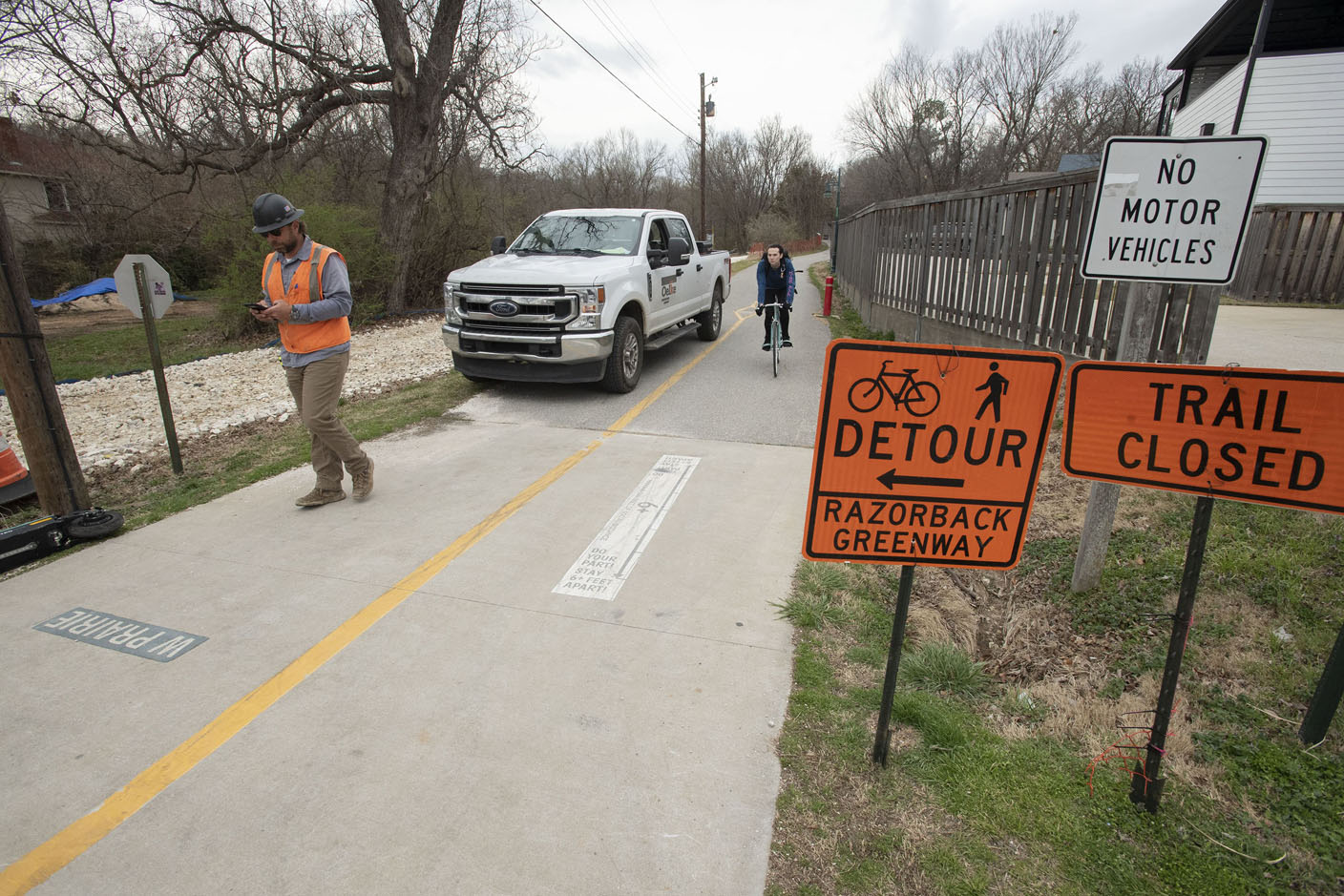 A bicyclist zips between Derrick Orpin of Bella Vista and a sign closing a portion of the Razorback Greenway Trail Monday March 21, 2022. A stretch of Frisco Trail, which doubles as the Razorback Greenway, from Center to Prairie streets will be closed to bicyclists and pedestrians until May 6 because of construction associated with the Fay Jones woods portion of the arts corridor project downtown. Trail users will be rerouted west to Gregg Avenue. Visit nwaonline.com/220322Daily/ for today’s photo gallery. (NWA Democrat-Gazette/J.T. Wampler)

For more information on Fayetteville’s arts corridor project, go to:

Uncertainty for Welsh households as Rishi Sunak announces £350 energy rebate in England but...

Why Audio and Why Now?