Spiralling childcare costs are forcing parents out of work, with many spending a third of their pay on fees, new research has revealed.

The TUC said its study indicated that the cost of childcare was putting huge pressure on family budgets.

One in three working parents with pre-school children spend more than a third of their pay on childcare, while one in seven of 2,200 workers surveyed said the costs take up more than half of their pay.

Black and minority ethnic and disabled working parents were most likely to spend more of their wages on childcare bills because they were more likely to be in low paid jobs, said the union organisation.

Meanwhile, Coram Family and Childcare’s 21st annual Childcare Survey, has revealed that the cost of childcare for children under two has risen by 2.5 per cent in a year.

It found that prices are highest in London, with parents in inner London paying on average £183.56 for 25 hours a week childcare for children under two. 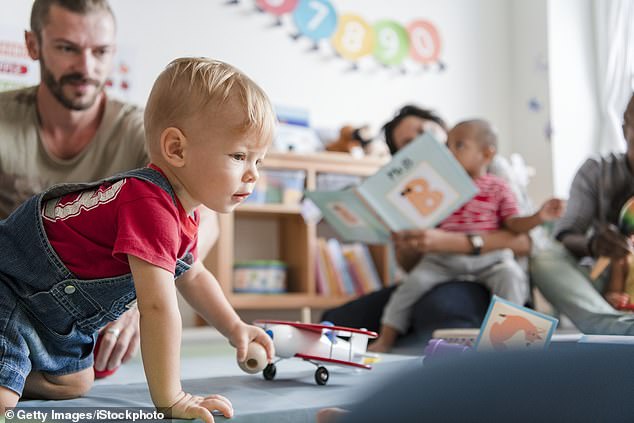 This is 50 per cent higher than the £122.17 that parents are paying in Yorkshire and Humberside.

The average price of a part-time childcare place (25 hours) a week for a child aged under two in a nursery is now £138.70 across Britain.

Nearly two-thirds (57%) of local authorities have seen childcare providers raise their prices and 30% said providers have increased the number of children looked after by each staff member.

Ellen Broome, managing director of Coram Family and Childcare, said: ‘Many parents, up and down the country, will be locked out of work or struggle to make ends meet as childcare prices continue to go up and the availability of places goes down. And the more vulnerable children will miss out the most on this boost to their development and outcomes.

‘High quality childcare is key social infrastructure, it helps parents work and narrows the gap between poorer children and their more affluent peers.’

A Government spokesperson said: ‘The early years of a child’s life are the most crucial, which is why we have invested more than £3.5 billion in each of the last three years to deliver the free childcare offers, including the 30 hours per week for working parents. We are also investing millions in Family Hubs – where families can access important support services. 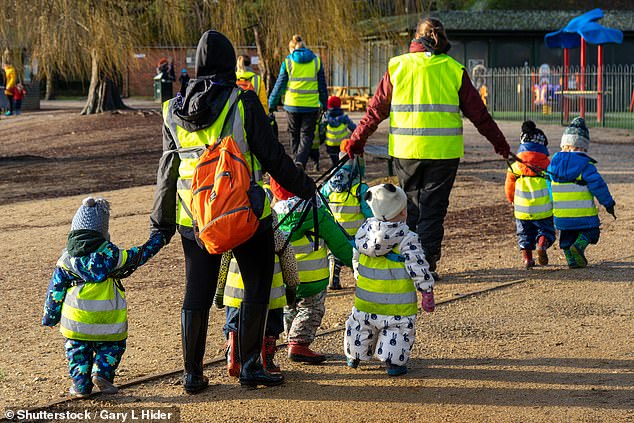 Meanwhile, Coram Family and Childcare’s 21st annual Childcare Survey, has revealed that the cost of childcare for children under two has risen by 2.5 per cent in a year

‘To support working families more widely, we also recently announced the biggest ever increase in the National Living Wage since its introduction from April 2022 – and thanks to our action, unemployment continues to fall.’

TUC General Secretary Frances O’Grady said: ‘Parents are spending a massive chunk of their pay packets on childcare bills, while their wages stagnate.

‘This is putting huge pressure on family budgets. We desperately need a plan to get wages rising across the economy or too many families will have to choose between turning their heating on or putting food on the table.

‘Every worker in Britain should be paid a wage they can live on, that goes up with the cost of living, and the government must commit to a boost in childcare funding to ensure decent affordable childcare for everyone.’

The TUC called for an urgent cash boost for the sector to give childcare workers better wages, and a long-term funding settlement to make sure childcare is affordable and available for families.

Helen Hayes, shadow minister for children and early years, said: ‘Good quality childcare and early education is essential for children to thrive and for parents to pursue a career, but it is wholly unaffordable for far too many families.

‘Unlike the government, Labour would put families first. To help ease the cost of living, we would halt the National Insurance tax rise and use a one-off windfall tax on oil and gas producers to cut household energy bills by up to £600.’

Veterinarians suffer from burnout as pandemic pet craze loads them with work : Shots

‘He loved the youth of Grand Rapids:’ Coach Rob remembered for his work with...