Vaxx Populi: Even if you’re double-vaxxed and you take a rapid test before arriving, the odds may not be in your favour

A problem inherent in exponential growth is that it’s often hard to grasp exactly how bad things can become in just a few weeks, or even a few days after relatively slow increases. And now, Canadians are having a hard look at whether the worsening COVID-19 situation will mean a second year of having to scale down or cancel holiday gatherings and travel.

A month ago, Canada was recording an average of 2,500 new cases a day and no one had heard of a new variant called Omicron. Now, with Christmas just two weeks away, that daily average has shot past 3,500 a day, according to COVID-19 Tracker Canada.

The bad news keeps coming. On Friday, Dec. 10, Dr. Theresa Tam, Canada’s chief public health officer, released the latest federal modelling of the pandemic. It projects around 7,500 cases a day by January, assuming our transmission levels remain the same. However, if transmission increases by as little as 15 per cent, or if the new Omicron variant gets established, like Alpha and then Delta, then a towering wave unlike anything previously seen could arrive by the New Year.

MORE: Omicron variant will likely be worse than Delta, according to early research 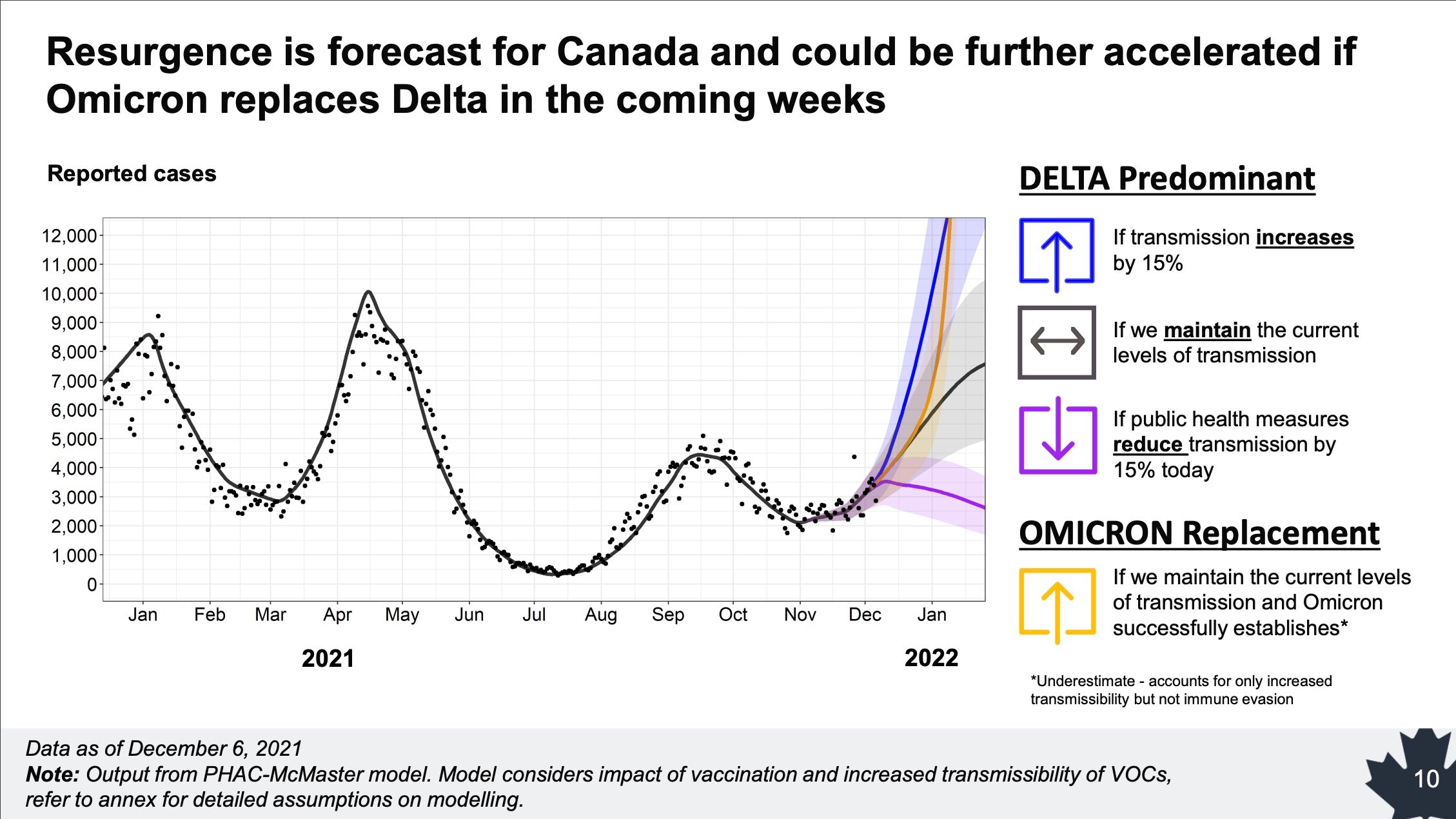 Later that day, Dr. Kieran Moore, Ontario’s chief medical officer of health, announced that Omicron accounts for roughly 10 per cent of the province’s caseload. Three days later, Ontario’s Science Table estimated that Omicron’s share of new cases was 20 per cent, and that its case count was doubling every three days. By the next day (Dec. 13) that share had jumped to 30.8 per cent and its effective reproduction number (Rt) had climbed from 3.32 to 4.01 (meaning every infected person infects four others). In contrast, Delta’s Rt is 1.09. It is expected to become the dominant variant in the province this week and will replace Delta entirely by Christmas.

And those new concerns mean reimagining festive gathering plans that were solidified weeks ago, when young kids were getting vaccinated and case counts were low. “Realistically, regardless of the potential risks, holiday gatherings are going to happen, even in the time of COVID,” explains Dr. Noel Gibney, a professor emeritus at the department of critical care medicine at the University of Alberta. “People are tired and need to see family and friends.”

Still, the experts advise limits to such parties. “Large holiday gatherings are probably not the wisest thing,” Morris states. “I think 10 [people] is a reasonable number, I think 25 is getting large.” And Gibney urges people to consider limiting the number of households in a gathering.

In addition, Gibney and other experts emphasize that those attending indoor gatherings should be double vaxxed at least, and preferably triple dosed. Rapid tests can help mitigate the situation, both experts say. “If younger members are gathering with older or at-risk individuals (obese, diabetic, hypertensive, immunosuppressed), they should get a rapid test,” Gibney also suggests. Pharmacies can provide results within 15 minutes, while online sellers, such as Canadian Shield PPE and Rapid Test and Trace, sell home tests for as little as $10.

And now is not the time for assumptions: “Gathering organizers should ask to see proof of vaccination and a negative rapid test on arrival. It would be even better if this was provided prior to arrival,” suggests Gibney, while acknowledging that such steps would likely strain relationships.

As well, experts emphasize that COVID-19 is airborne, which means that it can spread a lot farther and hang in the air a lot longer than most people realize. Think of COVID-19 like the lingering smells of cigarettes or Aunt Ethel’s casserole surprise. That’s why the Public Health Agency of Canada emphasizes that “ventilation is a key way to help prevent the spread of COVID-19” and is promoting ways to improve air circulation and filtration in homes, including opening windows and HEPA purifiers.

In case you’re thinking the risks may be overblown, consider what happened when workers of a firm in Oslo gathered at a restaurant for their holiday party in late November: even though only double-vaxxed employees were allowed in, and all were rapid tested as well, the event turned into a major outbreak because one of the 120 invitees turned out to have the Omicron variant. As of Dec. 10, 80 out of the 111 participants had tested positive for COVID-19, likely Omicron.

60% of employees want to work remotely some of the time

ECC appeals for understanding in delay in processing claims for COVID-19...